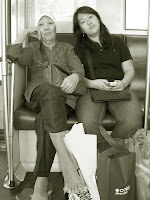 My Mom came! She was here to visit me. I picked her up at the airport. She brought some of my stuff from home. I was happy to see her after two years of being away from home.

It was great to have Mom here. I wish it had been a pleasant time for her, but it wasn’t. She didn’t like the food. She didn’t even like the food that we bought from an Indonesian restaurant. On the second day, she kicked a leg of the coffee table and was limping for a couple of weeks. Her skin became itchy and flaky. Her bones ached. She had a mysterious rash. I went to several Chinese herbal shops and pharmacists because she refused to see a doctor. Finally she came along with me and we found a lotion that cured the rash.
We never asked her to do anything around the house, but she said she couldn’t sit around on her butt and watch TV all day, so she cooked, ironed, and tidied up the house. After almost a month of suffering, she had enough of Sydney. When I asked her if she wanted to extend her stay she said no. Her body couldn’t take anymore. She wanted to go home. I tried not to cry on the day she left, but successfully failed.
Posted by homnaway2 at 12:30 AM No comments:

It was a sunny Sunday afternoon when the door bell rang. I opened the door saw a tall, wiry man in jeans, t-shirt and a vest. His hair was grayish and was tied neatly in a pigtail. His face was covered with gray stubbles. He asked me very politely if I knew where number forty-two was. The house that was advertised for rent. I knew the house had been empty for some time. I told him where - next door, behind the convenience store. He said “shieh shieh” and I was a bit surprised because he was not Chinese. He smiled cheekily and I was reminded of a wolf. I thought, what an interesting guy. Was he going to be our new neighbour?

A few minutes later I heard somebody coming into the neighbour's house through the back door. I heard some noises, like somebody was hitting the wall with a hammer. I felt a bit suspicious. Should I have a look? What if there was a gang of thieves there? I was alone at home. What if they saw me and decided to silence me? Should I call the police? Half a minute later the hammering stopped. Phew…, I thought. Perhaps it was just somebody that the owner had asked to repair something in the house.

Several weeks later I found out that the water heating system of the neighbour’s house had been stolen. And I thought of the interesting guy with the pig tail. So he was actually a burglar?? A very well-dressed guy, on a sunny Sunday afternoon, asking for directions to the house he was going to break into, and saying thank you in Chinese??????? Mate, the world has gone mad for sure.
Posted by homnaway2 at 12:08 AM No comments: