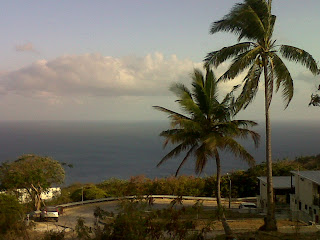 This was what happened. I lost a two-hour job because I had to go to deliver some money donated to some Indo fishermen at a detention centre. And because of that I also lost a one-week trial booking. As far as I am concerned that’s the end of the story. But there was more. The friend who got me the one week booking accused the interpreter who took the job of stealing it from me. Actually, she saved me a lot of trouble because I had already accepted the booking to Christmas Island before my one week booking was cancelled. I was wondering how to solve the problem and then it solved itself!

Anyway, off I went. From Sydney to Perth and then from Perth to Christmas Island. The first few days was very hard, because I practically knew nothing about the locations and procedures. There were many other interpreters there, most have been deployed to the island many times, so I felt like a new kid at school. But I was very lucky because the other Indonesian interpreter was very kind to me. We talked a lot. Actually, she talked and I listened, but it was fine, she also listened when I felt like talking.

I loved the island. I loved the view of the Indian Ocean, the fishies at the jetty, the robber crabs, the sea birds. Funny that the animal feared the most on the island is the centipede. And the one most hated is the crazy ant.

My fellow interpreters come from all over the world. Some of them I dislike, but most of them I get along with, and some of them I get along very well with. There was one handsome interpreter who used to be an actor in his home country. I once asked him a question, he looked up, and I saw a very beautiful pair of olive green eyes. No wonder he worked as an actor. One day I was stationed at the jetty because a new boat was coming. It was a Sunday and there were people swimming at the beach. A swimmer emerged from the sea and it was him! Slim and tall and well built, glistening in the afternoon sun. Now I have my own Daniel Craig moment to remember.

I met a local there who was a good friend of my roommate. One day he took us to his small plot of land where he had pet robber crabs. The crabs roamed freely, were not cuddly in anyway and did not come when called, so they were not ideal pets. But they looked like prehistoric animals and to me they were amazing just to watch. I even tried to lift one, but it clung to the table very, very firmly, so I let it go. 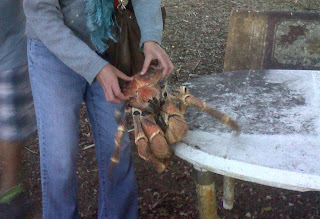 There were annoying colleagues, of course. One person had to be the first in everything - first to look at the daily schedule, first to use the computer, first to sit on the bus, etc. etc. One time he made comments about me to his friends (in Arabic) and they laughed. I didn't say anything but I stopped speaking to him at all for a week. Finally he spoke to me and tried to be nice. Huh!!

Still, I am very grateful that I was given the opportunity to go there. And as I am writing this blog, I am not even angry at those annoying colleagues anymore. 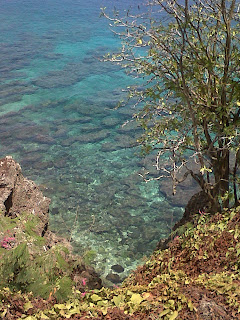