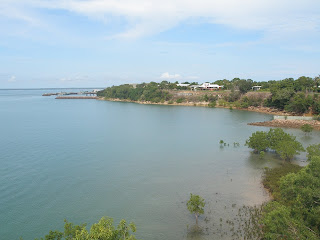 I travel a lot, so I’ve experienced all kinds of accomodations. Hotels, motels, homes of relatives. I did not expect much when I go on work deployments, but some accomodations are quite nice, while others are not so nice. I certainly did not expect to have as much trouble as I did in Darwin. For almost 5 weeks I stayed at a small hotel in the city. My room was okay. There was no window, only a sky-light on the ceilling, but it was clean and quiet, so I didn’t mind. Then on the third week I had a new neighbour. This neighbour slammed the door (perhaps unintentionally) everytime he (I am assuming that my neighbour is a guy) went in and out of the room. I sometimes sat on the bed with my back against the wall, and I could feel the wall tremble as the door slammed. Now door-slamming is one of my pet hates, so I was quite annoyed by this. One night I heard the door slammed very loudly. It was 11 pm, for goodness sake. I could not give that guy a piece of my mind because I was not even sure whether he was a neighbour to the left or to the right of my room. One thing was for sure, I was maaad. So the next morning, I got up early as usual. It was almost six. I got out of bed, opened the door to my room, and slammed it as hard as I could. I knew it would not solve the problem, but I hope it shook that @#$* out of his slumber. Who cares about the other guests around me. I felt much better.

When I was told I would be moved to a better hotel, I was happy. Goodbye door-slammer, I thought. Hello one-and-a-half story self-contained unit, with its own kitchen, two TVs, and huge windows. Hello also cockroaches. Thank God they were small. But they were many. On average I killed 4 a day. I felt like a butcher. I bought baits, I bought a spray. I smacked and smacked with my thong. They kept coming.

There was no remote control for the ground floor AC so I had to climb up and down a chair to switch it on and off. There was human poo near the hotel gate. I reported that but nobody did anything. Oh the flies and the stink!

On the 3rd day the kitchen light went dead. My unit became rather dark. I went to the front desk 3 times in 5 days but nobody came to fix it and nobody came to give me a remote for the AC. On the sixth day, I was washing the dishes after cooking in semi darkness, and the tap fell off. That was it!!! I sat down and wrote a letter addressed to the hotel manager, cc-ed to my employer. Basically I told them to fix the problems before I got hurt because of them. I made a couple of copies and I took one to the front desk again. I asked the staff to follow me to my room to see for himself. He looked at the kitchen light, excused himself, and came back with a new light bulb and a remote for the AC. I think I should have thrown a tantrum and made a scene at the front desk on the first day the light died. I have never done that, but seems like a useful skill to have.

Anyway, I was just happy that the two problems were fixed. My unit was bright and cheery in the evening again. I didn’t have to cook in semi darkness anymore. I bought some ingredients at the supermarket and cooked something simple. When I finished I washed the utensils and just as I was putting them back in the drawers I saw a cockroach. I got my thong in my hand, ready to strike. I followed the doomed little roach. It went into the drawer. I opened the drawer but I could not find it. I had a bad feeling. I pulled out all the drawers, and there it was – a NEST! A $%%#% roach nest! A few adults, a lot of babies, and hundreds of eggs. I sprayed the whole thing and went to the front desk, again. They told me the nest would be gone by the time I got home in the afternood. Good thing it was.

Needless to say, I was very very very very ready to go when it was time to go. That hotel was really something. As I was leaving my room, as a farewell present, my bag fell with my new aluminium water bottle inside it. The lid broke and the water spilled all over the inside of my bag. Oh, yeah, I also left my hat at the room. Great. Just great.
Posted by homnaway2 at 12:45 AM No comments: